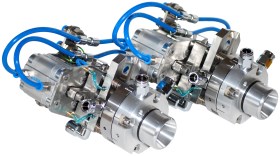 Following IBA's naming convention for targets COSTIS has been renamed: from this version it was marketed under the name Nirta Solid Compact. However, this is not the only change since the previous version. Many users were asking for the capability to load more than one target disk into the target station, so that several targets can be irradiated in a raw, without entering the shielding vault. The target guiding plate has been redesigned, so that a pneumatically operated charger mechanism could be integrated.

From this version onward the connection of the microswitch was made available through a Wago connector used by IBA by default wherever possible.