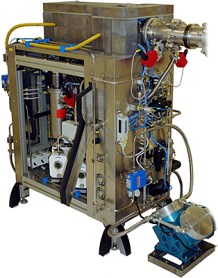 XETI (XEnon Target station for radioIodine production) is a target station for irradiation of highly enriched gaseous xenon. 123I is produced in the target by indirect nuclear reactions according to the following scheme:

During the irradiation one has all three radionuclides (123Cs, 123Xe and 123I) in the target; after sufficiently long time their activity will reach a constant value - the so called saturation activity. Typically, the target is irradiated for ~6 hours, which is only about 15% of the saturation activity of 123I. After the irradiation Xe is left in the target until the activity of 123I reaches its maximum (~4.5 h after the end of bombardment, EOB).

Iodine is deposited on the walls of the target, where it stays firmly attached to the nickel surface (the target is made of nickel plated aluminum). When the activity of 123I reaches its maximum, gaseous Xe is removed from the target by cryopumping. Finally, 123I is washed out from the target by hot water. This rough product is contaminated with several metallic radionuclides (produced by protons hitting the nickel plating and extracted while iodine is washed out from the target) and its radionuclidic concentration is rather low, due to the high volume of the water used for washing out the product. Therefore, in a last step the product is purified and concentrated using a two-step ion exchange chromatographic process.